Buster & I went and saw the new Star Trek movie last week, so it seems a good time to post my thoughts on it.

When I talk about it I always find myself mentioning a short laundry list of things that I didn't like, but for the most part they didn't hurt my enjoyment of the film much. Buster & I both walked out of the theater loving it, and I was feeling very happy that "my" crew was back, and they'd sold me on it! 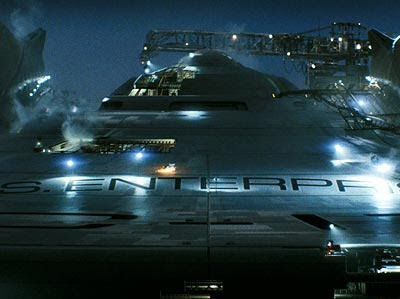 It was all about the characters, it wasn't particularly plot-driven. Fortunately I don't mind losing some plot in favor of characters, although I despise losing plot just in the name of more action (as with so many of the later 007 movies for instance). But the cast was excellent almost all the way through (I wasn't a fan of Ben Cross as Sarek, but hey, he's following Mark Lenard!), and for the most part I loved how the main characters came together.

I didn't like the excessive comic relief of both Scotty and Chekov; I think they at least got away with it more (pulled it off better) with Scotty. Chekov's accent was way too much over the top, although the actor himself seemed pretty good in the role.

And what's up with the giant hands?

Otherwise though the cast sold me, and I was especially impressed with young Mr. Kirk. Of all of them I went in the most skeptical of him, as I've always thought of the rest of the cast as characters, but Kirk was the Leading Man... he was Shatner! And yet, I quickly found myself accepting Chris Pine, and by the end I really did feel that he'd captured the essence of the character and I was sold. Many of the earlier scenes with him (like in the bar scene) where my gut reaction was, "Really?", once I took a moment to think about if a young Kirk would act that way... yeah, actually, I can see it, especially with his different upbringing.

The other thing that I really didn't like was the set design... I don't think there was a single interior ship set (Enterprise or Nero's) that I liked. Nero's ship looked like the warehouse from "Buckaroo Banzai" (and not only because of the torture scene). The Enterprise seemed to lack a common production theme... the bridge looked like the Apple store we'd criticized ahead of time, Engineering looked like the brewery it was filmed in and not like the inside of a starship (you'd think I'd be in favor of a space brewery, but Noooooo!). Sickbay and the transporter room also had disparate looks and feels, none of these places felt like they were part of the same ship. I didn't like any of it, but it again didn't really hurt my appreciation of the characters or what there was of the story.

As I said, I thought the story was just good enough to serve the function of the movie... which was simply to reset the Star Trek universe so they can do whatever they want going forward. I actually think this was a great idea, and worked well, as it really does mean no more concerns about canon while at the same time allowing them to re-introduce any elements from "classic" Trek they feel inclined to explore. Well done.

The only thing that I really didn't like in the movie from an overall enjoyment aspect was the entire ice planet sequence, which seemed contrived and lame beginning to end... from how Kirk gets marooned there (I mean, c'mon, really?!!) to how he leaves there and everything in between. The sequence exists to introduce Kirk to Spock (prime) and Scotty, and I'm certain there are many better ways that could have been accomplished without being chased around Hoth by ice monsters. Ugh. But before and after that scene I was fine with it all.

So yup, a lot of individual elements I find myself complaining about but at the end of the day it is indeed nit-picking, in the end the film worked for me emotionally and got me to believe that these characters, whom have always been "MY" crew, were back and ready to sail. Keep on Trekkin'!
Posted by Bismo at 5/13/2009 05:13:00 PM