Saturday was a bit of a get-away day... I left Buster and The Momma in Sedona for the day and traveled south to Phoenix, where I met up with my friend Doc (who "winged in" from LA for the occasion) to see a Diamondbacks game at Chase Field. Always fun to see another ballpark of course! The Dbacks were playing the LA Dodgers, who had former Sox (amongst others) pitcher David "Boomer" Wells starting for them. Boomer wasn't good. The Dbacks won the game handily, the same night that (as I found out the next day) the Red Sox came from behind (well, after giving UP the lead!) to beat the Devil Rays and clinch a playoff berth. (They would go on, of course, to clinch the division title a week later.) 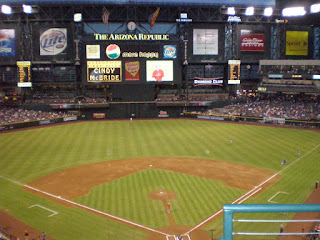 Great night, even if they DID have to cancel the post-game fan appreciation fireworks show due to high winds! Doc & I had dinner at Pizzeria Uno's afterwards, then spent the night in an area hotel before I dropped him back at the airport Sunday and rejoined the family in Sedona that afternoon. Beauty side trip, eh? 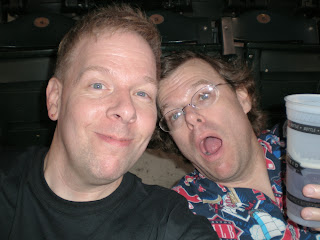