Friday the 28th, time to leave the condo - and Sedona - behind. Sigh! Next time we'll devote more days exclusively to Sedona. And yeah, we're pretty sure there'll be a next time, some year in the not too distant future! This time it was another loooong drive north, heading up east of the Grand Canyon, through part of the Painted Desert (uh, beautiful!) and back over the Colorado River via the Navajo Bridge at the Marble Canyon. Uh, beeeee-eautiful!! 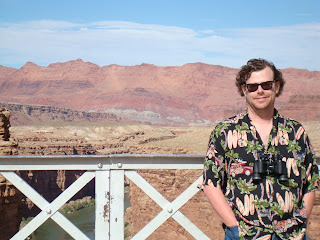 On Navajo Bridge over the Colorado River.

Now on the other side of the Colorado River we passed by the Vermilion Cliffs (uh, beautiful!) and into forest country, climbing up and eventually going to the north rim of the Grand Canyon! We spent a night just outside of the national park (in Jacob Lake), then another in one of the Grand Canyon Lodge's cabins, less than 50 yards from the actual don't-go-sleepwalking-out-there rim. 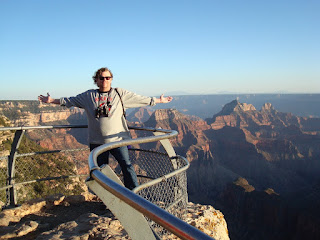 So we had one full day on the north rim... I will say, it was spectacular as well but unlike what I've heard from some, we thought the south rim was more stunning. In fairness though, we didn't have as much time to just explore on the north rim and didn't make it to what are considered the most beautiful overlooks on that side... both driving distance away from the Lodge where we stayed. The Lodge has two outdoor "porches", with stone wall edges hanging directly above the Canyon. In planning the trip I'd had visions of grabbing a beer at their saloon and drinking it on one of these during sunset... mission accomplished! 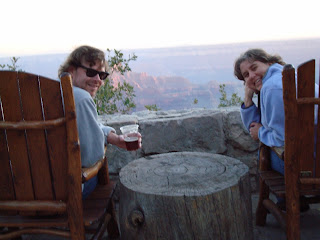