Hopefully I'll find some more but I've got a bunch of photos from the Shore Leave con posted now to my Flickr site. Enjoy! 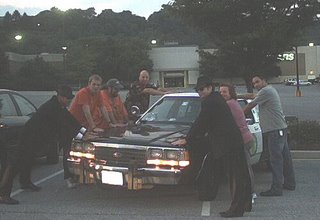 After months of anticipation we made it to the Shore Leave science fiction convention last week, and the trip did not disappoint. I haven't gone to the con for its programming in many, many years, and this was no exception, but the weekend remains one of the high points of the year for me each year. Mostly it's a chance to just Get Away... a break after many months of the daily grind. This year that was especially true, I hadn't had a vacation in 14 months (since last year's Disney World trip) and it'd been a particularly grueling winter and spring at work. Shore Leave for me is usually four days spent hanging out in a nice hotel pool and bar (despite the poor redecorating of the hotel this year, sigh!), and to catch up with old friends, some of whom I only see at this event each year. (Thanks to Towaway for the photo at left.)

As mentioned repeatedly on this blog in recent months, this year's trip was also to be the "official" christening of the new Bluesmobile. This was historic (well, at least to US!) not only for the sake of the new Bluesmobile, but because this trip marked the reunion, for the first time in 18 years, of my Blues Brothers partner "Jake" and myself! Jake has been in the US Marine Corps since fall of 1987, and he hadn't attended a convention since 1986. I'd last seen him four years ago, just getting together for lunch; but we last put the suits on and performed 18 years ago, at a July Fourth party in 1988. I've got my son, "Buster", and my friend The Hey, "Mighty Mack", personifying two Blues Brothers from the "Blues Brothers 2000" sequel (and the film that provided the model for my "Mark II" Bluesmobile)... but 25 years ago it was Jake & I... and we could sing.

Well, at least we could... that was a long time ago! But it'd be fun to put the suits on and see what we could still do, since we've never lost our passion for the characters and - more importantly - for the music.

So I put on the suit Thursday morning (this was July 6th), and then Elwood drove out to pick up brother Jake in western Massachusetts. 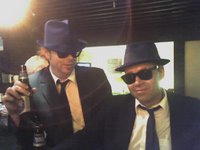 We headed south towards Baltimore, the car running beautifully and the tunes blaring, us bordering on blowing our voices out before ever getting there. Life was good. Even two very nasty traffic jams, both on the Jersey Turnpike, couldn't quite dampen our spirits (though the second one was much more frustrating). Seeing the Blues Brothers on the highway, other motorists were having a grand time jockeying for position to chat with us and to take our picture with their camera phones. We've gotta keep our eyes on the internet, there were literally scores of photos snapped of us on that drive (and also to a lesser extent on the return trip, when traffic was perfect). A Jersey State Trooper going northbound even pulled over to the center divider to check us out while we were stuck in traffic southbound, but he was happy to see us. The positive energy felt really good, and it's nice to think we made the traffic problems more tolerable for quite a few other folks as well!

We didn't reach the hotel until well after 8pm because of the traffic, but no matter... we settled in for a few drinks at the bar and started meeting up with old friends. Towaway was already there, up from Florida. The Hey, scheduled to arrive Friday afternoon, strolled in unexpectedly around midnight Thursday night instead. Sweet! Mojo was finally delivered by his drivers not long afterwards, in from Hollywoodland. We were up late talking, drinking, hanging... just catching up.

Friday, the first day of the con, we mostly just wandered the halls (and the bar and the area restaurants). After a great dinner with many of our fellow McAuliffans (our science fiction fan group), we were back at the hotel, and around 11pm decided to check out the karaoke bar going on in the ballroom.

There was some buzz when we walked in from folks who noticed us. After a few we decided to go for it, and signed up. Took about 40 minutes for our turn to come up, but we got a great introduction... "You've seen our next entrants lurking in the shadows in the back of the room for a while, so let's bring them on... the Blues Brothers!"

We got a lot of applause as we made our way to the stage, then it got quiet... "These guys look good, but do they think they can sing?"

Yes, we did... and we were right. We broke into "Hey, Bartender", and we rocked the house. Jake's vocals were dead-on, my harp sounded strong and pretty good, and though we hadn't as much as rehearsed in 18 years, we still had the moves. We left to a thunderous (well, to my ears at least but I believe it's not too overstated!) ovation and calls for more.

A little later we went up for an encore and went with the more traditional "Soul Man", again sounding good and feeling better. (Though we did manage to briefly mix up a verse, where the karaoke version had an unexpected edit... threw us off for a moment as we hadn't been watching the prompters at all!)

It turns out that was it for the weekend for any opportunity to perform. We'd hoped for a chance to do more... but even so, it was enough. It reminded me of the Blues Brothers movie... pick Jake up from prison, drive across a few states for a few days, perform two songs and then back to the clink!

I paid for it a bit later that night though. I've got a bad back, and I must have pinched something dancing during the performance. I didn't notice it then but by the time I was heading to bed I was in considerable pain and limping badly. It was a tough night sleeping, but I couldn't have been happier regardless! After a morning(-ish) soak in the hot tub I was feeling better, and totally recovered by Saturday afternoon.

Though our stage time was certainly our own personal high point of the weekend, Saturday night was a close rival as we joined with about 20 McAuliffans gathered for a dinner to celebrate our 20th anniversary as a group. We definitely consider ourselves "family" and so this was a special gathering, and we were happily surprised to be joined by another couple that none of us had seen in many years, Shawn & Melissa Allen. They lived not too far away and had actually met through the McAuliffe, so seeing them - and their two children - was a special treat indeed!

I'm gathering some photos from the weekend and will get them posted to my Flickr site sometime in the next week or so. Here's looking to next year, when with a bit of luck the
Brothers will ride again!

In the meantime, only 75 days until my next vacation, the big family trip back to Walt Disney World. Yay!