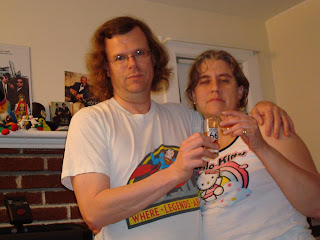 Indiana Jones and the Kingdom of the Lost Skills

Okay, so I saw Indiana Jones at the midnight show last Wednesday night... held off on posting this until after the weekend so's not to throw any biases out there! This is one of the two movies I've been really looking forward to this year ("Dark Knight" being the other one). And as I'd sen very mixed reviews ahead of time from the Cannes premiere at least I wasn't too disappointed.

But overall, I didn't think much of it.

The middle was... okay. Not bad, some good fun in there, I especially liked the scenes at and around the college. The beginning should have been exciting and fun, but something about the pacing, the timing of everything just didn't work. It's always been traditional to jump right into an adventure with Indy in these movies, but after 19 years I think that was a big mistake here... we should've been introduced to Indy in his "mundane" classroom life first... let's see who our hero has become, before following him back onto the field. Think of the fun if we spend 20 minutes or so with Professor Jones, and then he has to go back in the field with Mutt so we get a big reveal scene of him putting on the costume once more! But no.

I see what they were doing. They're playing on the 50's B movie plots, as they did with the 30's and 40's adventure serials. Okay. But, it didn't work with the same character from those earlier serials.

It was fantastic, awesome to see Karen Allen back as Marion. But, she didn't really have much to DO now, did she? And except for the one fun dialogue scene in the back of the Russian truck (and it's set-up while they're sinking in the jungle), there wasn't a lot of chances for real chemistry between the two of them.

And man, is there some bad dialogue, especially near the end... wow.

So not too much detail here, still don't want to give away spoilers, but I think it was an opportunity missed. Some nice moments to treat the fans, subtle ("I've got a bad feeling about this") and not-so-subtle (Sean Connery's photo, a statue of Denholm Elliott). It's absolutely still a must-see to any fan of the franchise. I also know a few people that really liked it, though most are in the middle (I'm slightly below the middle, I'd say!) So go, and make of it as you will.
Posted by Bismo at 5/26/2008 02:59:00 PM No comments:

Yeah, THIS Will Stop Them!

WELLINGTON (Reuters) - Road workers in a small New Zealand town got their wish granted when a woman stripped saying she was fed up with their wolf-whistles.

The Israeli tourist was about to use an ATM in the main street of Kerikeri, in the far north of the country, when the men whistled, the New Zealand Press Association reported.

She calmly stripped off, used the cash machine, before getting dressed and walking away.

The woman told police she didn't take too kindly to the whistling from the men repairing the road.

"She said she had thought 'bugger them, I'll show them what I've got'," Police Sergeant Peter Masters told NZPA.

"She gave the explanation that she had been ... pestered by New Zealand men. She's not an unattractive looking lady," Masters said.

"She was taken back to the police station and spoken to and told that was inappropriate in New Zealand."

Okay, here's a pet peeve - During sporting events, why do so many advertisers think they can better sell their products by couching it in some ridiculous sport-related setting? Sure, if it makes sense, but.... as an example, I just heard a commercial for windows (not the software, mind you, the kind birds like to fly into!) and it was all ballpark sound effects, and a vendor going through the aisles yelling "Windows! Get your windows here!" Someone yells, "I'LL take a window!" Yeah. Makes sense. Next time I'm at Fenway I'll have to remember to pick up a few!
Posted by Bismo at 5/21/2008 07:48:00 PM No comments: