Spring Is In The Air

Interesting weekend... thanks to The Hey, it looks like I'll be able to go to Opening Day at Fenway next month for the first time in three years! Yay!!! I'm doing something I tend to avoid doing, paying above face value, but it's been a long time and I couldn't resist. My thanks to The Hey for the opportunity and for doing the legwork. Should be a very fun season this year the way the Sox, Yanks and Blue Jays are all constituted. I've got tickets to another game just a few days later, the first weekend of the season, after that though not sure if I'll get to more yet.

The Bluesmobile's still running great but I am losing coolant on her, similar to last year (but no where near as bad) when the heater core failed on me. Hopefully this won't turn out to be more than a bad coupling somewhere... no leaks when she's parked, just blowing it out under pressure it seems. Gonna bring her in in a couple of weeks to get the snow tires pulled off anyway so I'll get her checked then.

I've also been talking with a guy in Florida who recently bought one of the original filming cars from "Blues Brothers 2000", it's been fun chatting with him and comparing notes. He was from MA originally, so hopefully we'll be able to hook up some time either when he's up here or I'm down there.

We're likely not going to Florida this year as we plan to visit The Momma's brother and sister-in-law (and brand-spanking new nephew) in California this spring/summer instead. Though I hear there's now a possibility that they may be moving over the summer, ironically enough to Florida, so we'll see what happens!

Oh, and stay tuned, there may be more big Bluesmobile news on the near horizon, depending on how a couple of things pan out over the next two weeks or so...!

Bluesmobile Scare... But No Worries

Winter finally caught up with the Bluesmobile Thursday night... after 4-5 days of high temps in the 20's, and lows in the low single digits with heavy wind chill factors, she wouldn't start for me when I went to leave work Thursday night (actually about 1am Friday morning). Cranked like a champ, but no fuel. Hoping it was a frozen fuel line (I'd filled the tank on the way in that afternoon) I left her be, got a ride home from a co-worker (thanks again, Bek!)... and let her sit there through the last sub-freezing day yesterday. 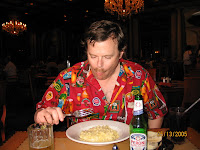 This leaves me almost speechless... For those that have read my posts from/after our Disney trips, you know this has been my favorite restaurant on the planet for about the past 20+ years! No, I don't think it likely I'll get there before closing. Have to book a trip to Italy instead....

Get your Le Originali Fettuccine All'Alfredo while you can

In news that will thrill some and traumatize others (people either love or hate this restaurant), L’Originale Alfredo di Roma Ristorante will be the first of the original table service restaurants in Epcot's World Showcase to disappear from the park. The restaurant will close at the end of its current contract on August 31, to be replaced by "a new Italian restaurant concept."

Disney has not released any details of what the new restaurant concept might be, only that they are "currently finalizing negotiations with a strategic partner." They have confirmed, however, that the new "dining experience" will continue to have International Program cast members staffing the location. That would seem to rule out the fears expressed by some that a domestic Italian-American chain would move into the location.

It's not known why Disney and Alfredo's are parting company, but it's a pretty sure bet that Disney either made the break or created a situation that led to the break, as the location was certainly not a money-loser for Alfredo's. In fact, for the year 2004, Alfredo's was number 13 on Restaurant and Institutions Magazine's Top 100 Independent Restaurants listing in terms of food and beverage sales. It's not likely that the restaurant would look to leave with that kind of income rolling in.
Posted by Bismo at 3/08/2007 08:15:00 PM No comments: