Visiting the ORIGINAL House Of Blues

Okay, so I still haven't gone through the pictures from the Bermuda trip! Soon, soon... I'll get to it!!

In the meantime though, yesterday we took a ride into Harvard Square to hang out for a bit, so of course I stopped by the former Harvard Square HoB. Last I'd heard it was a BBQ joint, now though I found it to be a serviceable Irish pub, Tommy Doyle's. Here's some pictures, and a few more can be found on my Flickr site.

The still-familiar (if you've seen the original) facade, now painted green instead of blue:

Saddest to me was seeing the old hand/feet impressions in the cement of the adjoining driveway, several more of these at the Flickr site but here's The Colonel's:

So there's an overview, not quite the same! And for those who haven't seen the original Cambridge House, obviously quite different as well from the much larger venues that it spawned. It was so intimate, a fantastic club... but of course only a few hundred people to a show.

Sometime in the next month or two I'm planning another drive-by of the Lansdowne Street site where they're building the new Boston House of Blues, scheduled to open this winter, to get some updated pictures. It'll have to be on a non-game day (Rde Sox), though!
Posted by Bismo at 7/14/2008 09:26:00 PM 1 comment:

I know I need to get some vacation stories and photos up here, they're coming I promise! Been a very busy week since we got home and we haven't even looked at the photos ourselves yet, though we have at least got them downloaded from the cameras. Hopefully this weekend I'll make a start on them and get some posted by the beginning of next week.

To follow up on my letter to WDW below, I did get a response already... Tuesday morning I got a lengthy phone message on my answering machine from a representative in the "executive offices" of WDW. Though the gist of it was, "It's a Done Deal, sorry", it was at least a fairly personal message and clearly I was heard... that of course makes me feel a bit better about things, even if still mourning the Adventurer Club's imminent passing. (If I can find a place to post an audio file of the message I'll link to it from here later.)

I can only hope that if enough people speak up, maybe they'll re-open it in a new location somewhere in the future... there's precedent, as they did that with Chef Mickey's restaurant after it closed in the Village in '95.

And on the Plus side, it does now look like Jake & I will in fact be in the Club on its last night of existence (and hopefully the night before as well), to close out the place! If the crowds aren't so bad we get shut out, that is... we'll worry about that in a few months.

If You Enter as a Stranger - 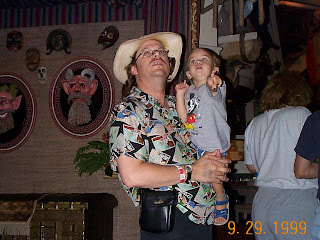 "...You will exit as a friend." An open letter sent to the Walt Disney Company, regarding the recent announcement of the impending closing of Please Island in Walt Disney World and, most significantly, the Adventurers' Club -

I'm sure this is a waste of effort, and doubt very much it would ever be read by anyone of consequence, but I must state my feelings on this one. There was a time when I'd have felt writing a letter to the Disney Company very useful. Now, it seems to be about the corporate, not about the magic it used to represent. But I'll sully onwards anyway, martini in my hand.

I can't begin to state my shock, sense of betrayal and outright anger at the recently announced decision to close one of the most unique venues in a place that prides itself on one-of-a-kind entertainment, the closing of Pleasure Island and especially its crown jewel, the Adventurers' Club.

The Adventurers' Club is uniquely Disney, and also unique to Disney... No Disney characters or corporate branding and yet seething with Disney magic and fun. To replace it and the surrounding clubs with an "iconic attraction, in the form of a giant, tethered balloon that will take guests 300 feet into the air"... well, usually I'd have to travel as far as my local COUNTY FAIR for such excitement! And a design-your-own T-shirt store? Yup, that'll save me a trip to Cafe Press on my computer! There is nothing special, unique or iconic about such plans. It just cheapens Disney further and further to the level of entertainment I can easily find locally without traveling 1400 miles and spending tons of money on.

I've been going to WDW once or twice a year - with maybe two years skipped, including last year - for almost 25 years now. I first visited the Adventurers' Club in the fall of 1989, not many months after the Island opened. Every year I still proudly display my original cheap, plastic membership badge pin from that first visit, which always impresses the cast. I remember when the barstaff were all Nash. I've danced for Babylonia, and sung with Samantha. I've had the bartenders work their magic for me, on myself and on many many friends I've brought there over the years. It is without question the highlight of my trip every year... we tend to visit the club two or three times every trip we make. My 11-year-old son loves it as much as I do, and is so proud of his own little rubber "participation" pin he earned two years ago. He's as upset about this as I am, so it's not just an "adult entertainment" perspective. It's our preferred nightlife destination when in Florida, and a significant reason we keep coming back.

I'll mention a few of the other reasons I keep coming back to WDW (keeping in mind we especially enjoy the atmosphere, food and drink aspects of WDW more than the rides, which are bonus to us).

Favorite quiet hide-away for a quiet mid-day or evening drink: The Matsu No Ma Lounge in Epcot, where I first tasted sake 15 years ago and have loved it ever since and where my son has delighted not only on the origami presents from the servers, but on a few of them remembering him visit to visit, sometimes a year apart. Oh yeah, that's gone too now, absorbed into the main Japan restaurant.

Favorite WDW attraction, ever: Horizons. I still weep. Mission: Space is fun, but there's no spirit, no soul, no happiness. Just a cool simulator ride. Great as an addition, but came at the cost of part of Epcot's soul. As did World of Motion and the abomination that is the "re-imagineered" Journey Into Imagination.

Speaking of abominations, do not even get me started on the new Enchanted Tiki Room! Once a favorite guilty pleasure - my web domain, "hail the Tiki", is not a Polynesian reference but a tribute to that once great, imaginative show before it became just more character shill - it has been decimated into a Saturday morning puppet show. Again, I can get better entertainment and a county fair.

At the moment, the only truly special place on a personal level for me (even if not so much for the rest of the family) that sounds like it's been untouched is the Rose & Crown Pub in Epcot. Let's see how long that lasts.

Boo, Disney! Boo. I quickly went from shock and depression to anger and actual RAGE at hearing about the Club's eminent closing. To add insult to injury, I fly in to Orlando for this year's trip on September 28th. According to the press release, the very day after the Club closes. Swell. The family and I have already been planning next year's planned two-week trip down to WDW, and we are now seriously debating going elsewhere. Disney may still have great rides, but the MAGIC is spilling out faster than sand through a clenched fist.

Give us back our magic. Spare the Adventurers' Club, if not Pleasure Island. And if you won't, well, much as I hate to suggest it as it would itself diminish this great concept, but if you won't, FRANCHISE it. Sell the concept, the characters, and open Clubs around the country.

One better darned well be in Boston.

Hailing the Tiki (and Babylonia!), but losing my faith,

Kunguloosh! (To use our all-purpose greeting, and you can guess its meaning in this context.) 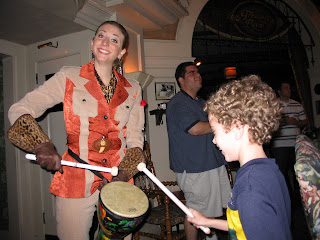 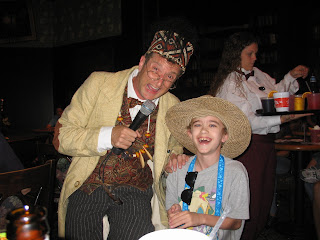 Yup, we're back home from our cruise. Overall good time though we all had some nausea issues, epecially Buster. Details and photos to follow in a few days after we get settled back in!
Posted by Bismo at 7/04/2008 10:45:00 AM No comments: