I watched the revamped classic STAR TREK episode "Balance of "Terror" this morning, done with new special effects... basically I can take it or leave it, but at least they were true to their word and very respectful in how they changed the effects. No scenes were added (so I wouldn't expect we'd see the fleets in "Errand of Mercy", for instance), just replaced. Some shots looked very nice, though only one shot of the Bird of Prey really jumped out at me as something great. Quite a few shots looked good, but several also had that flat, 2-D cgi look as well and just distracted from the show.

The remastering itself was great, at least watching it on a standard-def TV. Colors and contrasts were great, though that made some of the new CGI shots look even more flat by comparison.

It was fun to see, and I'll look forward to seeing more episodes, but certainly not something to make me want to upgrade my DVDs. (And not sure I'd choose the new versions over the old if I was buying the sets for the first time.) Will younger people really be happier with the new effects? I don't know, I guess I'm not really in a position to judge. But I'm content with the approach they took, at least!
Posted by Bismo at 9/17/2006 04:35:00 PM No comments: 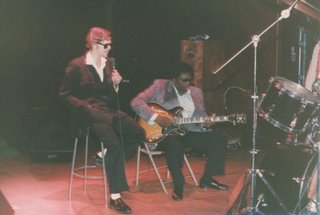 B.B. King turned 81 today, and though he's slowed down a bit he still spends more days touring than most performers a third his age! Buster and I will be going to see B.B. in concert in mid-November, it'll be his first (and very possibly only) chance to see this legend before B. retires!
Posted by Bismo at 9/16/2006 07:03:00 PM No comments:

I was attending a (very dull) business meeting at my company's Canton, MA facility this afternoon, and found that Davenport Avenue in Canton has been destroyed and built over by a new, still under construction condo complex.

Davenport Ave is where we lived for 6-7 years back in the 80's, the days of our "wild youth". And our rented house on that old dirt road, #12, was definitely the center of our wildest moments. Dubbed the "Blues Mansion" (and also later the "Blues Mansion East" as we also had parties at Jake's place in western MA), it was the gathering point for a large group of friends... most of whom were part of what became our Star Trek fan group, the "USS Christa McAuliffe". We had New Years' and Independence Day parties that lasted a minimum of three days and as many as 5 days, depending on when the holiday fell. (5 days would be a mid-week holiday, stretching into the weekend!) It's where some of us met for the first time, and most of us are still close friends to this day. It's where our original Bluesmobile was housed much of the time throughout that decade.

You get the picture. I was very pleased when, just a few months after I moved out of that house at the end of the decade, I learned in a town newspaper that when they implemented a new E-911 phone system in Canton they had to change the house numbering... on that particular house. Our number had been retired! Now the old New England cape-style house is gone (probably has been for a while, though I know it was still there early this year), but the memories remain.... 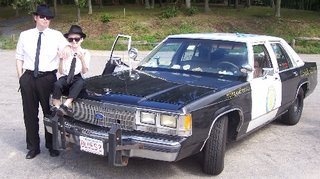