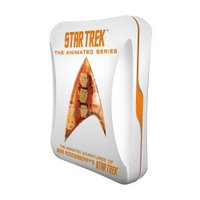 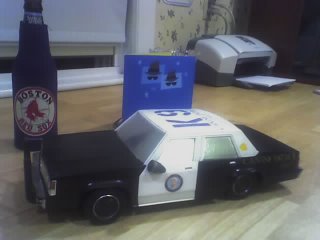 At left is the gift I received from Jake this week, a large-scale replica of the Bluesmobile II he put together from me! It started life as a toy Crown Vic, but Jake did the paints and markings, and fashioned the push bars and spot lights himself. This photo doesn't do it justice (I'll take some better ones this weekend when I dig out the "good" camera) but I had to share it. (That's a standard 12-ounce beer behind it, for scale.) Thank you, brother!! 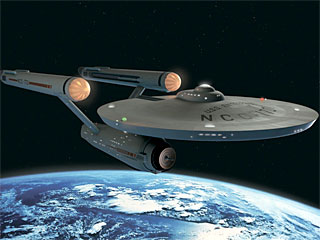 I've been watching the re-mastered classic “Star Trek” episodes the past few weeks, featuring the newly-rendered CGI special effects. For the most part I've thought the remastering was excellent, with clean prints and vibrant colors; the new CGI has been okay, but only just. Some shots looked good, some looked very flat.

Until this week's episode, “Space Seed”. They have a much improved CGI Enterprise model, that looks fantastic, and they really used some excellent creative angles on the exterior SFX shots of the Enterprise and the Botany Bay (the semi-derelict 1990's ship they come across in this episode). For the first time I really thought the new effects did in fact improve the show. Bravo!!

Of course, watching this syndicated has sucked as the episodes are still cut up, with many scenes chopped. I still doubt I'll be buying these on DVD when they're released as I did splurge for the original classic DVD box sets but at least they're really showing they are truly committed to improving the show without changing it.

A Night at Symphony Hall 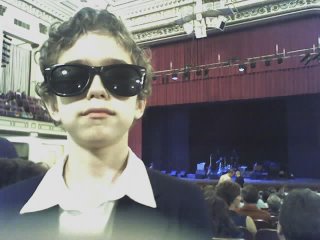 Buster & I had a busy but very fun weekend. Friday night I took him to see B.B. King... a 3-hour concert is a bit much for a 9-year-old (even one who likes blues!), but B.B. is 81 now and probably won't keep touring much longer... with Buster old enough that he may actually remember this show it seemed a worthy adventure to let him see this blues legend! And yes, it was long for him and he had moments of boredom and fidgeting, but whenever a song he knew was played he'd bounce right back and on a few occasions start singing along! It was his first real concert, and when it was done he was very glad he went. He was even able to go down near the stage at the end of the show and scored one of the little souvenir pins B tosses out to the crowd when he's done.

I've seen B.B. many times over the past 20-odd years, and have also met him twice... once even singing with him, a story I'm sure most reading this know and have heard enough of! It's been both fun and bittersweet watching B.B. maturing, and of course noting how I myself have gotten so much older... time marches on, the ultimate blues. Each of the past several times I've seen

him B has looked a bit older, a bit more tired... and yet hasn't backed down from giving the audience what he's always given us: himself. An evening with B.B. really feels like you're meeting the man... no on-stage patter for him, he talks to the audience with true stories and lessons from his own life. The man is amazing, and amazingly humble. As always lately, I'm hoping this wasn't the last time I'll see him!

On another quick note, The Hey and I saw the new James Bond movie last night ("Casino Royale"), and came away very happy! I've always been a big Bond fan, but the movies have become more and more "Blowed Up" stunt extravaganzas with over-the-top stories and cartoon-character characters. This had its share of stunts but was still a genuine spy story with overall fairly believable characters... not perfect by any means but a great story and a good return to the basics for my favorite secret agent. Here's hoping they can build on this and keep moving in that direction!
Posted by Bismo at 11/20/2006 07:54:00 PM No comments: