A friend & I just took a brief break from work here and climbed up onto the roof... and saw "Atlantis" and the ISS zoom over! Not too often that we get a really good sighting opportunity this far north but they were at a near-90-degree elevation and not long after sunset, so they were very bright... one trailing the other by maybe 10 degrees of arc, taking about four minutes to cross the sky. Beautiful! (We'd tried last night, but it was overcast... they were much lower in the sky last night anyway so tonight was perfect!

A Sunday at the Ballpark

(Edited Tue.6/19 to add photos. More photos from this day available at my Flickr site!)

A near perfect Father's Day yesterday! Buster and The Momma took me (well, okay, let me take them!) to a Brockton Rox baseball game. The Rox are an independent league team and Campanelli Stadium is one of my favorite ballparks to go to these days, very nice yet roomy and not overcrowded, with good food and beer (yay, beer!).

The game itself was great, a pitcher's duel which the home team lost in the 10th inning, 3-2. We weren't sure who to root for though as they were playing the Nashua Pride, who, when we lived in New Hampshire during the first 5+ years of Buster's life, we would often go see at their home ballpark! It was also a bonus that we got to see former fan favorite Red Sox relief pitcher Rich "El Guapo" Garces, who now pitches for the Pride (and is still, uh, larger than life!). Guapo came in to close in the bottom of the 9th, with the Pride winning 2-1, but he gave up the tying run forcing extra frames. After the Pride retook the lead in the top of the 10th Garces came out again to this time successfully close the door and get the win.

The Rox do a great job of upholding the minor league tradition of making a day at the ballpark fun for the whole family. Before the game Buster was able to get a free horseback ride (he was psyched to be first in line, our timing was perfect!), and then they let us go down on the outfield and play catch for about 20 minutes before clearing the field for the game. After the game we all went down again to run the bases and touch home... naw, I ain't too old for that!!

The day was very, very hot though, which led to a couple of interesting moments. While Buster was waiting to go into a kids' bounce house at the ballpark I went to buy him his ($1) ride ticket. The kid (alone) at the ticket counter was weaving, holding himself up with his arms, frequently wiping his face... obviously in severe distress. He insisted (without much focus) that he was fine, and when I insisted he needed to drink some water (offering him ours) he said he had his own. Without really seeming to know what he was doing he reached under the counter and pulled out an unopened bottle of water, put it on the counter and instantly forgot all about it.

I called The Momma over (she's an RN) and she was on the case, getting the kid into the shade and getting the staff to call for medical help. I've seen her step in like this before and it's always a proud moment, and I was glad I had a chance to help in this case as well.

Then the shoe was on the other foot... Buster hadn't worn shorts (long story) so was spending about every other half inning staying up on the shaded concourse rather than in our (excellent but very hot!) field seats. We'd go check on him every now and then and he had a comfortable spot against the wall of the concourse, sitting on a small ledge ("lip" might be a better word!) near the bottom of the wall and enjoying the gentle but pleasant breeze up there.

The Momma came down at one point after she had been up there and was upset that they had told him he couldn't sit there! Now, I doubtless overreacted a bit (but really, just a bit) in the heat out of fatherly concern (and testosterone), but I went and talked to the person that had told him he couldn't stay there and after asking if she'd really said he couldn't stay there, basically opened the discussion with asking her if she was aware that we had just saved the life of one of their employees (and hopefully that was an exaggeration, but there was definitely truth to it as well) and now my sweat-pants wearing son couldn't sit in the shade? (I didn't quite raise my voice but it was implied... again, yeah, I probably overreacted a tad!)

She handled this excellently though and comped us some passes to an air-conditioned luxury suite they had set up for just such heat-related situations in the extreme heat. Apologizing and thanking her I went up there with Buster and The Momma, then seeing they were all set went back down to our field seats. The box was very nice, including outdoor seating in the shade right over home plate, but I still preferred the field seats myself. The family came back down a few innings later feeling much better, and really the whole thing just made for a better day. (And we were quite friendly with the security attendant for the rest of the game as well.)

They'd given us a cool parking spot for the Bluesmobile, as well, by herself at the front of a lot on the street and therefore visible to everyone going in and out. Yay.

So even apart from the heat and indeed because of it to some extent, a terrific day. We were mighty exhausted when we got home, and pretty grungy from sweating and pouring water on ourselves throughout the afternoon, but it was a terrific time. (I'll try and get this blog entry updated again in the next day or two with some photos from the day.)

Less of a fun day today though, as before going into work I attended a memorial service for a good friend's mother. I didn't really know her (had met her only once or twice and a great many years ago) but I've known her son and his wife for a very long time and they were hurting... my sympathies and prayers go out to you, Dave and Leslie. 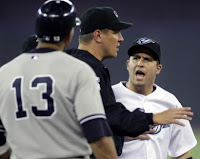