Been To The Mountain!

Saturday night, I finally saw The Blues Brothers perform live. After almost 30 years! Buster and I went to the Foxwoods resort in Connecticut for the show, to see Elwood and Zee Blues (Dan Aykroyd and Jim Belushi) performing in front of the Sacred Hearts Band.

The show was electric. The moment the curtains went up the band blasted into a "Soul Finger" instrumental, the band members all lined up side by side at the front of the stage forming a wall of power pushing out into the audience, horns blaring. Wow! Elwood and Zee came out afterwards to a boogying John Lee Hooker-like riff, and broke into "Sweet Home Chicago". The show was powerful and relentless, it kept coming at you song after song, all great fun and fantastic music.

The Brothers did what they're known for... provided a fun-spirited, high energy package showcasing great music performed by an incredibly strong band. They covered the Blues Brothers "era" front to back, from the first "Briefcase Full of Blues" album ("Messin' With the Kid", "Almost", "Rubber Biscuit" and of course "Soul Man") through Dan and Jim's own "Have Love Will Travel" album from a few years back ("Have Love Will Travel", "300 Pounds of Joy", "Swinging Party" and "Driving Wheel", amongst others), and much from in between. Judy Salgado did a great rendition of "Natural Woman", that woman's got a voice on her! They closed by dedicating to "She Caught the Katy" to "Joliet" Jake (John Belushi), and finishing with "Soul Man". They encored with "Everybody Needs Somebody to Love/Love Light".

Though Elwood doesn't move quite as well as he used to (much like myself!), the choreography, while less manic than Back In The Day, was fun and well-suited to their abilities. Zee also spent quite a bit of time during numerous songs roaming the audience, and inviting others to dance... mostly the hot ladies, of course! (Excepting on "300 Pounds", where he was belly-wumping with a few other larger gentlemen from the crowd.)

Another special treat for me was the inclusion of James Montgomery playing harp with the band (instead of Jimmie Wood). James is a very dynamic harp player and a New England blues institution, I've seen him play many times over the past 20+ years and on several occasions have shared beers with him. (He actually used one of my harps in a show he did in Cambridge once... I swear I didn't think it could do the things he was doing with it!) 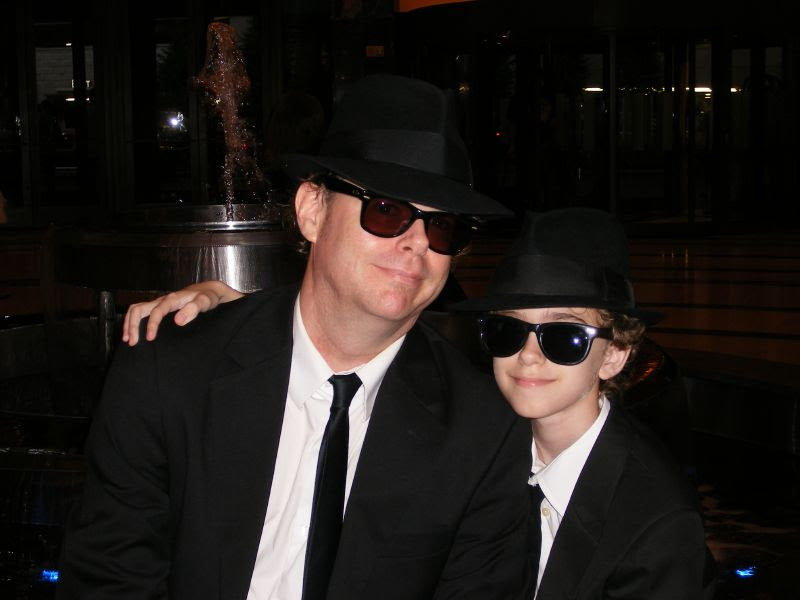 Buster loved the whole show and was dancing to many of the songs... dancing is his thing. He was the hit of the resort, too... though we'd hemmed and hawed about it we did end up going to the show in full Blues regalia, Elwood and Buster side-by-side, with the Bluesmobile in the garage.

We got so many compliments and were so comfortable in the suits (which I haven't often worn in public since Jake joined the Marines way back then) we were wondering, Why did we hesitate? It may be time to let Buster and Elwood Blues become more commonly known around New England. Let's see, we're going to a Buddy Guy/George Thorogood show in two weeks... and rumors persist about a possible return to the area by my own Joliet Jake within a couple of years....

After the show Jim Belushi, still in uniform, signed autographs in the lobby. I got a new copy of "Have Love Will Travel" autographed for Jake, and for myself asked him to autograph a clear peel-off mailing label that I then put on the Bluesmobile's dashboard. It'll do until I get a chance to get the car itself autographed one of these years... Buster also got an autograph and he's quite proud of that. Here's Zee autographing Jake's CD: 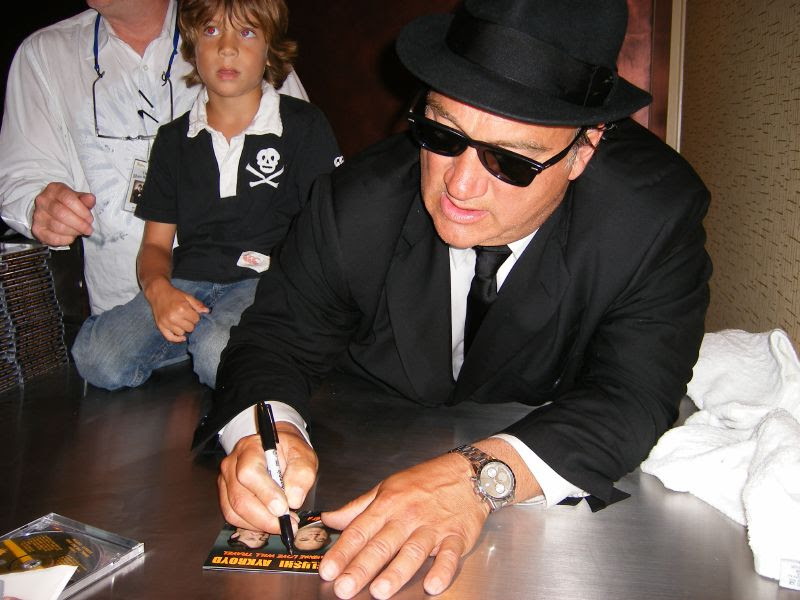 All in all a fantastic night. The concert itself, so long looked forward to, was so emotionally powerful to me that it was hard to recall specific sights and sounds even an hour afterwards... just the emotional high.

We also hooked up with a couple of friends we've met through the online Blues Brothers forums, and that was great... Marc "Stein529" from New Hampshire, and Adam "ElwoodJones" from Connecticut. Below Buster and I are pictured with EJ in front of the Bluesmobile after the show: 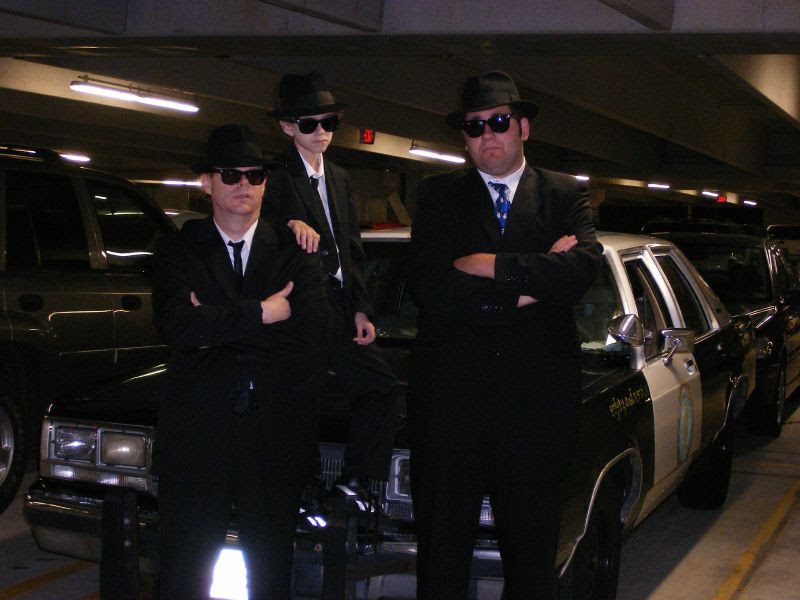 It was great seeing them (I'd met Marc once before, and regret I didn't catch up with him again after the show) and it's fun having a circle of Brothers in the area.

Now the next goal: to get to see a Blues Brothers show together with Jake! We had an extra ticket for him but he wasn't able to make the trip up from Missouri this time. But with the new House of Blues being built in Boston, we're hoping the Brothers will perform there when it opens and we'll be trying hard to score seats to that one. Keep the Faith.....


(Below, I couldn't bring myself to put "ELWOOD" on the knuckles for this show; there was only one Elwood in the house that night in my mind! So I tried something different:) 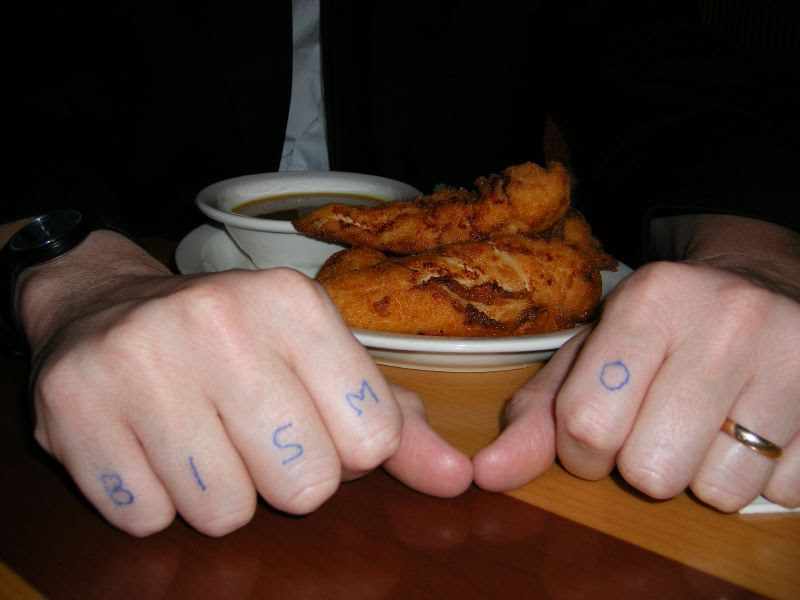