We checked out of the Monte Carlo around 11am Monday, and my last order of business for the vacation was to check out the Star Trek Experience at the Las Vegas Hilton. This I did solo, which I'd later regret, but it was a fun take... a great little museum of props and costumes from the various Trek series and movies (going all the way back to the 60s), and two shows. The first - older - one was Klingon Encounter, a "Star Tours" style motion simulator, aboard a Starfleet shuttle as the Enterprise-D battles a Klingon warship nearby. Though the sim was no big deal, the ending was cute as they bring you "back in time" to present day Vegas and the starship battle continues in the skies over the Strip hotels!

The best part by far though is the pre-show, where you get beamed up to the Enterprise-D. Neat effect as the waiting room you're in suddenly, after a flash of bright light and then a few seconds of darkness, morphs into the Enterprise transporter room! They escort you through an Enterprise hallway and onto the bridge itself, where you get a briefing from Commander Riker on the main viewscreen. Walking these sets are by far the best part of the whole experience and worth it on their own. They then take you in a turbolift down to the hanger deck where you board the shuttle for the actual sim ride.

The other show is "Borg Invasion", an immersive 3D Voyager-era movie. Also not an overly exciting concept, but the movie itself was very cool and the effects were terrific, especially when the Voyager drives into and through a Borg cube... nice! (And nice work by my friend Mojo, who worked on that project.)

After seeing the shows and the museum I stayed for lunch in Quark's restaurant and bar. Great food and a fun atmosphere, and, uh, good drinks.

Ah yes, the drinks... I had too many good drinks! I generally stick to beer these days, but here I had several "James Tea Kirks", basically a very yummy, blue take on Long Island Iced Tea. (I STILL think it should have been called Romulan Ale, which everyone knows is blue! But the Romulan Ale they had was beer.) I was talking with others in the bar (Klingons, Romulans and others roam the bar from time to time to chat, and there were some other fans there as well) and enjoying the blue brew, not really paying attention to how many I'd had.

I guess I had five of them! I completely let my guard down and by the time I left, I realized, oops...! This wouldn't be a problem normally but I definitely wasn't going to be in good shape to fly. After hooking back up with the family we decided to suck it up and spend an extra night, and we ended up coming home Tuesday night instead. We got a fairly inexpensive room in the Imperial Palace, though of course changing the airfare ran me a pretty penny! Ah well, The Momma wasn't upset about it as I was at myself for getting caught offguard like that. And we did get home fine the next day (despite a delayed flight). No trip is perfect, and hey, at least I got my Vegas story! (And yeah, I was tempted to leave it there but what the heck!)

So that was the trip. Except for that extra day lay-over at the end it was pretty damned near as perfect a vacation as you'd ask for, and I'm sure we'll get back to that area again. Though, lots of other places to see as well! Our next family vaca is expected to be next summer, an extended family cruise (extended family, not extended cruise!) to Bermuda to celebrate my folks' 50th wedding anniversary. Should be fun! 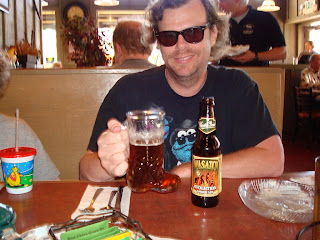